I can’t remember if I’ve brought this to the blog in the past or not, so I’m going to assume it was just on Facebook and/or Twitter. Now that that’s out of the way, let’s talk about VERSE NOVELS!

What’s a verse novel? Maybe you know them as “novels in verse”. There are a few terms to use, but they all boil down to one obvious thing: They are novels written in verse (poetry) instead of prose (what everything else is written in).

Why do I enjoy them so much? That should be somewhat obvious. I’m a poet. I enjoy poetry. And you also know I enjoy novels in general. Once I discovered the magic of joining the two forms, I was hooked.

I first read a verse novel back in grade school. It was Karen Hesse’s OUT OF THE DUST. I remember talking about the fact that it’s written in blank verse, but that fact dissolved in my memory shortly after. I remember enjoying the story, but that was all. That is, until I rediscovered the form a few years back in Sonya Sones’ writing. I found out about her book WHAT MY MOTHER DOESN’T KNOW. I read it. Enjoyed it. Got hooked. I’ve since read all of her books (except one, because I don’t want to be without more of Sones to read) and from there, branches out into other authors work.

I have to admit that I’ve stuck mostly to Young Adult verse novels. It’s not completely by choice, though, partly it is. There seems to be a larger amount of verse novels for YA readers out there, compared to those for “adult” readers. I also think it’s a marketing thing because I’ve discovered a few adult titles are marketed as being poetry, but lacking take about the story aspect. Probably a few reasons for this, but I won’t speculate here. But back to my mention of YA novels. I think most of my recent YA reading has actually been done with verse novels. YA is already a pretty accessible type of book for anyone to get into, but adding in the verse form makes it even more so. And not in a bad way. I think it makes them “easier” to read while opening the story up to having a deeper message, emotional response, etc. Verse forces the author to be limited in word choice (in most cases), and I feel this makes every word used count that much more. The books may be fast reads, but I feel that I’ve gotten more out of them at times than prose novels because of the lack of words and focus on what really needs to be said.

On a less critical, and more fun note, I also like when authors play with the visual form in their verse novels. One author who does this in many different ways in all her novels is Ellen Hopkins. Her text isn’t restricted to the left side of the page. It’ll jump to the right, middle, and everywhere in between. The text placement lends to the reading of the lines and what’s being conveyed. Some of the connection between text and text placement can go over my head, even, but I don’t think her books would be as powerful if they were all left-aligned. That works for other authors, and there’s nothing wrong with that either. But at times, poetry needs to push itself across a page, be different, and stand out.

I hope I’m not alone in my love of verse novels. I do know a few of my readers have experience with them. Maybe some of you haven’t explored that part of the book world yet. I’m here to help. I’d like to close this post out with a list of verse novels I’ve enjoyed. Some of them are as recent as this week…and I’m planning on grabbing a few more from the library soon. They’re addicting! 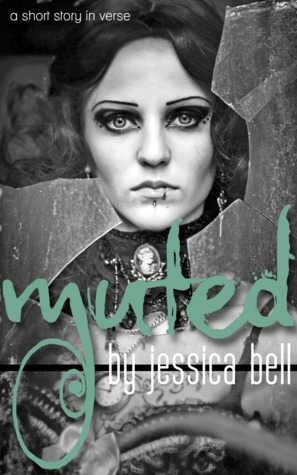 It’s illegal to wear clothes. In some streets, it’s also illegal to sing. Concetta, a famous A Capella singer from before “the change,” breaks these laws. As punishment, her vocal chords are brutally slashed, and her eardrums surgically perforated. Unable to cope living a life without song, she resolves to drown herself in the river, clothed in a dress stained with performance memories. But Concetta’s suicide attempt is deterred, when she is distracted by a busking harpist with gold eyes and teeth. Will he show her how to sing again, or will the LEO on the prowl for another offender to detain, arrest her before she has the chance?

I’ve been getting into “verse novels” a lot lately. I’ve discovered that there’s a great world in between poetry and prose that can be found in this style of writing. When I came across this short story in verse, I was intrigued, to say the least.

Being that this is a short story and it’s in verse form, word usage is bound to be constrained and word choice key to making the story aspect work. Overall I felt that Bell had a great concept with this as a story. The main character was interesting and the dystopian setting caught my interest. But, I feel, the limits of the writing form got in the way of me fully enjoying the story.

I felt there was a need for more world building. There’s enough to get the reader to understand the dangers, crimes, etc of this society, but it’s a little too much of just “on the surface” explanation.  I was also a little lost at times when it switched from the present to the flashback of Conetta’s last concert then back.

Don’t get me wrong. There was good to go along with the issues I felt the story had. I applaud anyone for trying to write a story in verse and hope that this author has more in store. I have a feeling that if I were to read another verse story of hers (if she has any or plans on writing more) that happens to be longer, I’ll enjoy it. For this one, I think it needed a little more room to grow. It’s still worth checking out.

You can grab a copy of muted from:

If Jessica Bell could choose only one creative mentor, she’d give the role to Euterpe, the Greek muse of music and lyrics. This is not only because she currently resides in Athens, Greece, but because of her life as a 30-something Australian-native contemporary fiction author, award-winning poet and singer/songwriter/guitarist, whose literary inspiration often stems from songs she’s written.

Being the daughter of a semi-famous rock ‘n’ roll duo from Melbourne, she grew up surrounded by song. For a while it seemed logical to travel the musician’s path, especially when her first band, spAnk, hit it off in the Melbourne indie music scene back in the late 90s. Although she spent her years writing and recording dozens of songs she decided she also had a love for the written word, and began to pursue a career as a writer.

She started as a poet, drawing from her musical background and etching her thoughts and feelings into verse. Those stanzas soon turned into sentences and paragraphs, and eventually into published books. Her literary voice is said to overflow with “lyrical descriptions, unique metaphors, tight dialogue, and an abundance of sensory detail.” She has also been told she has the ability to take a seemingly ordinary three-chord type story and turn it into a main stage event.

In addition to her novels, her poetry collections (including FABRIC, which was nominated for the Goodreads Choice Awards in 2012), and her pocket writing guides (WRITING IN A NUTSHELL SERIES), she has published a variety of works in online and print literary journals and anthologies, including Australia’s Cordite Review, and the anthologies 100 STORIES FOR QUEENSLAND and SHADOWS AT THE STAGE DOOR, both released through Australia’s, eMergent Publishing.

Additionally, she is the Co-Publishing Editor of Vine Leaves Literary Journal, and makes a living as an editor/writer for English Language Teaching publishers worldwide, such as Pearson Education, HarperCollins, Macmillan Education, Education First and Cengage Learning.