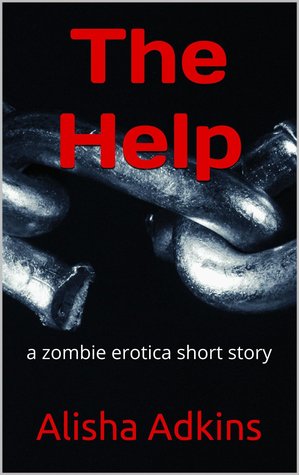 “In this zombie erotica short story, the zombie apocalypse has been effectively quelled, and now the undead are just another commodity to be bought and sold.

When Lydia purchases a zombie house servant, she has other duties in mind for him.” (description from Goodreads)

I’m torn in my reaction to this story. On one hand, I thought there was an interesting concept to the story. Most zombies in books are dangerous, out-of-control, freakish monsters that can’t really be controlled or stopped. What Adkins does is turn them into semi-harmless animals. Zombies have become the slaves of the new world.

It’s not that I’m a reader who’d enjoy reading about humans having sexual relations with zombies. I don’t’ think I’d enjoy it at least (could always be wrong, I guess). My reaction is mixed because when I see the label “erotica” on a story, there are certain expectations for what will be found within the story. It wasn’t there. What I found was a good zombie short story that had room to be added to an entire world of stories or a novel continuing the exploration of this “zombie slavery” culture. There’s a lot there to work with, just from this story.

You can grab a copy of The Help from:
Amazon

Alisha Adkins is a native of New Orleans and has also lived in Dallas, San Francisco, and Nagasaki Prefecture, Japan. She holds a B.A. in history and a Masters in education from the University of New Orleans. After working as a high school English and history teacher for ten years, she eventually escaped, and now works as an educational consultant for a major publishing company.
Written in 1998, Flesh Eaters was her first work of length. She maintains that writing it was her natural psychological response to teaching middle school.

Other titles by Adkins include Daydreams of Seppuku and Making the Best of the Zombie Apocalypse.

This site uses Akismet to reduce spam. Learn how your comment data is processed.